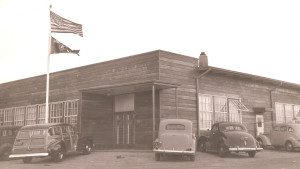 On this date in 1943 a little remembered event occurred. The first company newsletter was published. It was not given the name Watts Current until several issues later but it did set the stage for the kind of employee engagement the company would become so famous for.

At this time the company was small by today’s standards but it had grown significantly since 1938 when it was just Bill and Dave in the old Palo Alto garage. By October of 1943 the company had 129 employees and was established in the Redwood Building in Palo Alto, completed early in 1943. At that time the company had only 16 products in its catalog including: Audio Oscillators, Signal Generators, Harmonic Analyzers, a Square Wave Generator, a Volt Meter, and three models of Frequency Measuring Equipment.

The US had entered the Second World War 22 months earlier and Bill Hewlett had taken a leave from HP in 1941 to serve as a Captain in the Army Signal Corps while Dave Packard kept everything running. The company was very involved in the war effort and produced equipment primarily for use on ships and aircraft. The first government contract was awarded in 1941 when Wright Field (now Wright-Patterson Air Force Base) purchased six Model 205 Signal Generators. During this period the company was under a great deal of pressure due to rigorous and often demanding production schedules. This was also the time when the first “Beer Busts” began to help employees celebrate their hard work.

As a final thought, I wanted to share a quote from a letter Dave Packard wrote to the editor that was also included on the front page of the first newsletter, “I hope your paper will make the HP Co. a better place to work. You are free to use it in any way you wish. Do not hesitate to criticize anything you feel is wrong. Your criticism will be accepted in good spirit and your suggestions will be given fair valuation.“