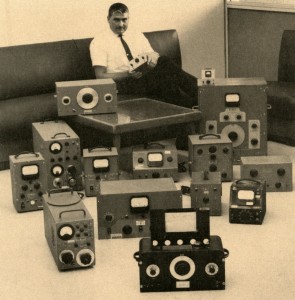 Although our archival program didn’t start until 1987 I had mentioned in the last post that efforts at starting one dated back to the early 1970’s. The instrument collection dates back even earlier though. In the mid 1960’s a group at HP’s Western Service Center (WSC) pulled together a selection of historical instruments that could be used for exhibits and promotional displays. Scott Grundemann, who was the quality assurance manager for WSC, was the person who began the project. From the company’s own equipment inventory along with some pieces added by supportive customers they assembled “some 15 vintage instruments” which were to become the beginning our historical instrument collection.

These pieces of equipment are easy to identify as they were given a small aluminum tag affixed to the case that has “Vintage Collection” engraved onto it. In our collection today we have 16 instruments with these tags including the one featured prominently in the center bottom of the image. It is the earliest audio oscillator we have in the collection and is easily recognizable by being painted black and having the distinct round cornered case. Any of you that have visited the History Center will recognize it as the Model 200 we have on display under the image of Bill and Dave in the garage.

The image itself is from a short article on the back of the August 1967 issue of Measure magazine where the project was described. Although it is unlabeled, the person seated behind the instruments is almost certainly Scott Grundemann. For his and his team’s early efforts at historical preservation I want to extend a belated “thank you” on behalf of the collection and all the visitors who have enjoyed seeing these early instruments over the years.